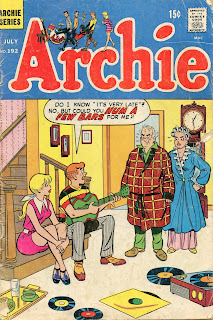 I loved the whole Riverdale Gang, Archie Andrews and Jughead and Reggie and Moose and especially Betty and Veronica, RAWR! Here's the cover of issue 192 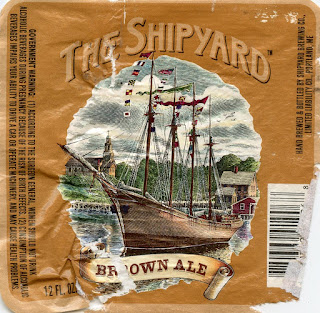 I don't know if they still make this one, Shipyard has really grown since I first tried their beers, I should probably see what they are about now.  Shipyard is a Maine Brewing Company. I lost interest in them when they became part of Miller Brewing.... but...... I did not know that apparently neither the Shipyard Founders nor Miller Brewing were happy with the relationship and the founders bought the company back from Miller and have been running it as a "family" business ever since!

I did not know any of that until just now when I googled them to see if they still make this Brown Ale, so we've all learned something today! 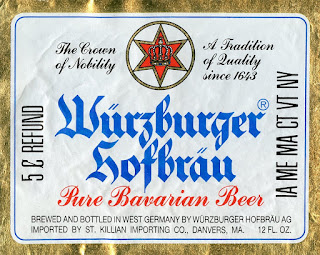 A tradition of quality since 1643. Wurzburger Hofbrau Pure Bavarian Beer. When I was younger, before craft brewing showed me that there's more to beer than Budweiser, I was a big fan of pilsener beers. I still like them, but now that they aren't the only game in town I don't drink them often. Many taste the same, so I can't see shelling out the extra money for an imported pilsener that tastes a lot like Bud.

Now, having said that, I'm not sure what Wurzburger Hofbrau tastes like as I drank this in the 90s, but I'm just guessing it's not too far from our own "King of Beers" after sitting in a bottle in a cargo hold getting shipped to the US. Now, if I were sampling it in a pub in the Bavarian Alps, I'm sure it would be delicious and worth a second, third, and fourth sampling! 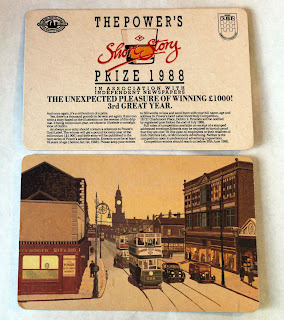 Here's a fun beer mat or coaster, it's by Power's Whiskey and it advertises a short story writing contest. 1988 was the year of Dublin's Millennium, so that's part of the contest too! One side of the coaster explains the contest and the other is a nice street scene of Dublin.
at July 07, 2019 1 comment: 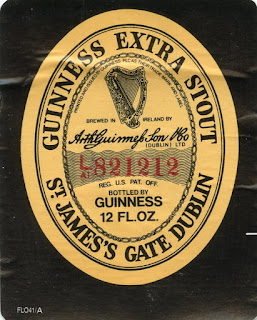 This is a label from the '90s from the old bottled Guinness that was absolutely terrible. Since then they've applied science and things to the process of bottling the stuff so that the Guinness you can buy at the store actually tastes kinda like the wonderful Guinness you can get at a pub. I believe they have a do-hickey that injects nitrogen and love into the drink, making it taste more like the pubs' version.

I absolutely love Guinness. I lived in Ireland for a while and drank way too much of the stuff when I was there. As they say, no beer comes near.

Guinness Coaster 1987-8 No Beer Comes Near 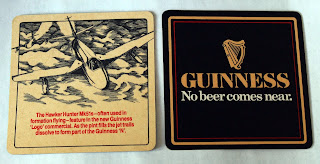 "No beer comes near" was a great slogan because I still think of it when I think or hear the name "Guinness." This was part of a whole set of coasters that had the iconic Guinness Harp Logo on one side and a little factoid about one of their advertising campaigns on the other. This one is about a plane called the Hawker Hunter Mk51s, a plane that had been used in a commercial. 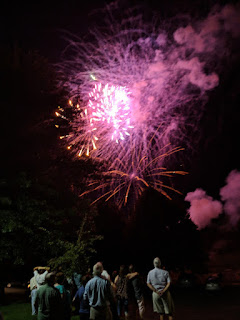 Fireworks are the ultimate in ephemera- they are only around for a few seconds. Here's a pic I snapped at the fireworks I went to last year. Hope you all have a wonderful holiday! 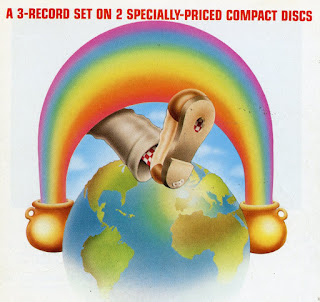 This is one of my all-time favorite albums. I loved everything about the Grateful Dead, especially their artwork. The classic "steal your face" skull and lightning bolt, the terrapins on Terrapin Station, all of it iconic. This album is great and the art is too!
at July 03, 2019 1 comment: 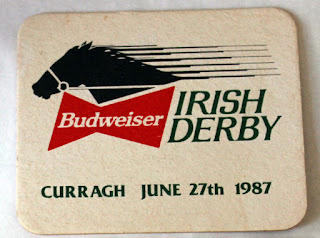 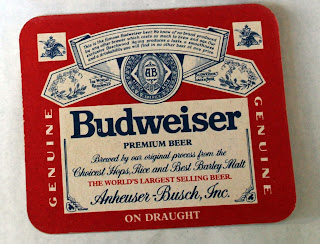 This is a "beer mat" or coaster advertising The Irish Derby, held June 27, 1987 at Curragh and brought to you by that famous Irish beer, Budweiser!

When I lived in Ireland in the late 1980s Budweiser was making a huge push to become a thing in Ireland. I don't know why they thought they could crack that market, but I suppose that those same great minds are responsible for the fact that Bud is no longer brewed by an American company. 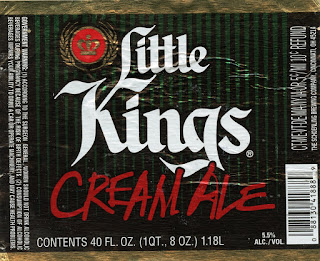 Little Kings Cream Ale screams Cincinnati. It's brewed by Hudepohl-Schoenling Brewing Co. in Cincinnati, Ohio and is, in my humble opinion, pretty decent beer.
at July 01, 2019 No comments:

This blog is where I post scans from ephemera that passes through my hands. Old graphics, advertising, cool images that I find I will post here and share with you! ALL RIGHTS RESERVED ON ALL GRAPHICS FOUND ON THIS BLOG.